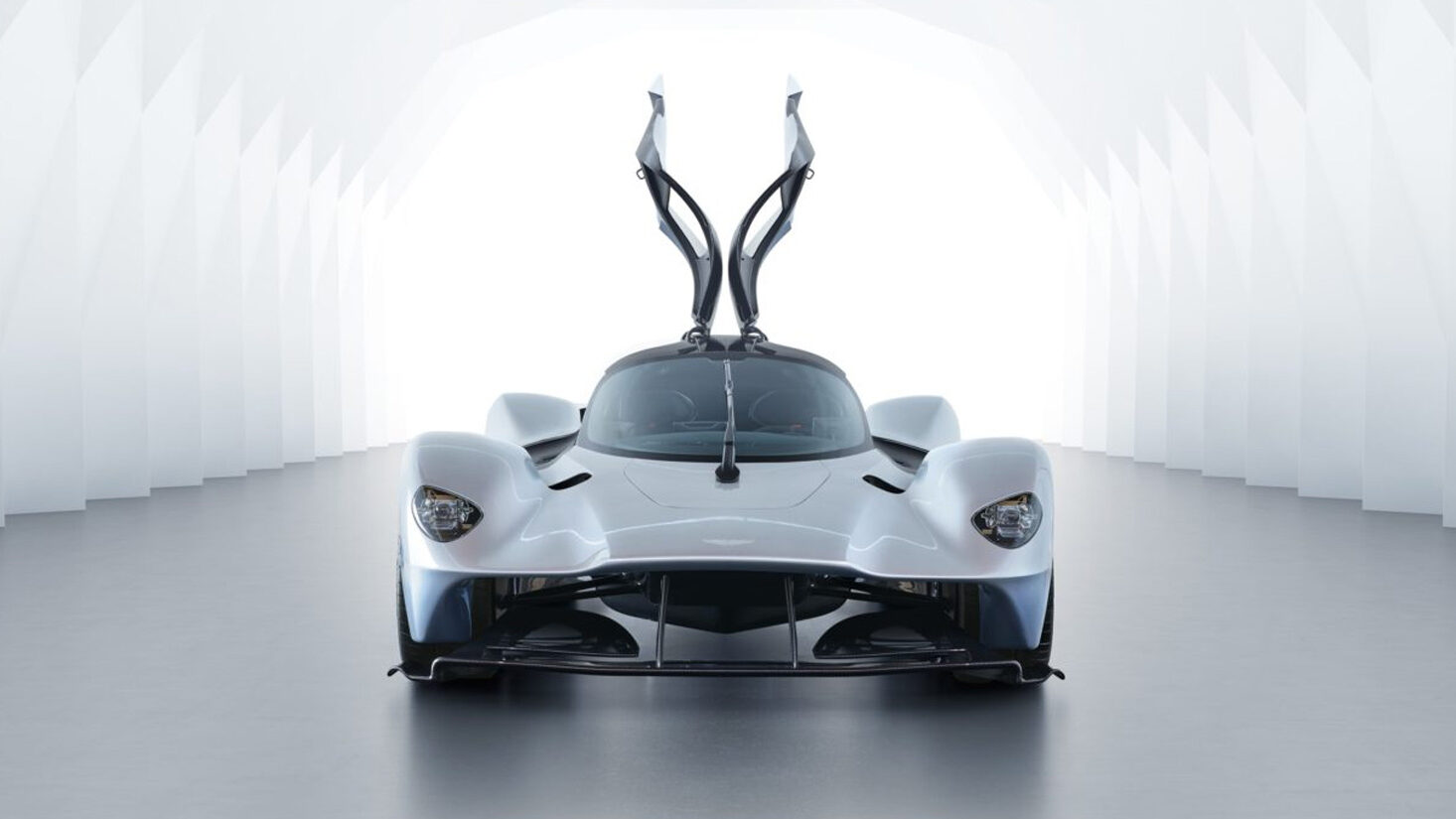 12 July 2017, Gaydon: Since the first reveal of the Aston Martin Valkyrie hypercar in July 2016, Aston Martin and Red Bull Advanced Technologies have been working intensively to further develop the Valkyrie’s aerodynamics, body styling, and cockpit packaging.

The teardrop-shaped cockpit’s upper body surfaces and lower tub contours follow the envelope of space available between the huge full-length Venturi tunnels that run either side of the cockpit floor. Drawing huge quantities of air beneath the car to feed the rear diffuser, these tunnels are the key to generating the Aston Martin Valkyrie’s extraordinary levels of downforce while keeping the upper body surfaces free from additional aerodynamic devices that would spoil the purity of the styling.

To maximize interior space the seats are mounted directly to the tub, with occupants adopting a reclined ‘feet-up’ position reminiscent of today’s Formula One and Le Mans Prototype race cars, ensuring driver and passenger are extremely safe, perfectly supported and feel completely at one with the car. A four-point harness comes as standard, while an optional six-point harness will be offered for those who intend to do more track driving. 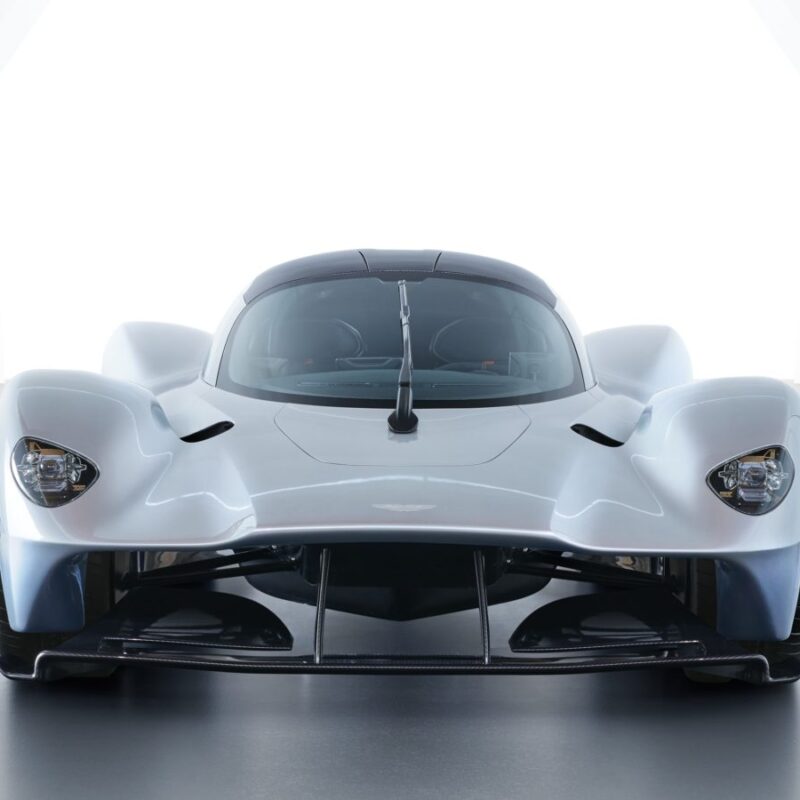 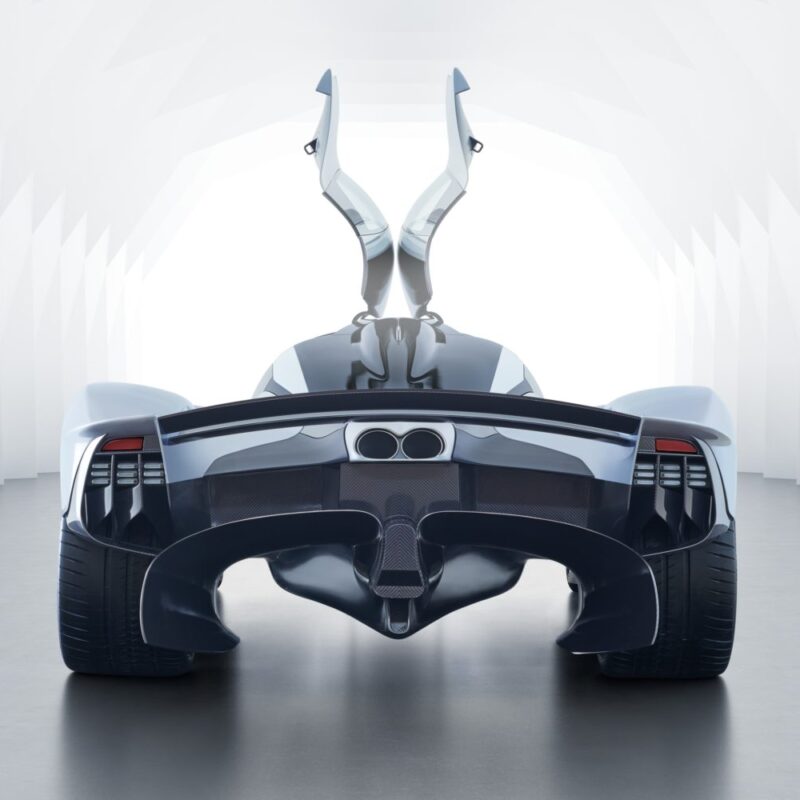 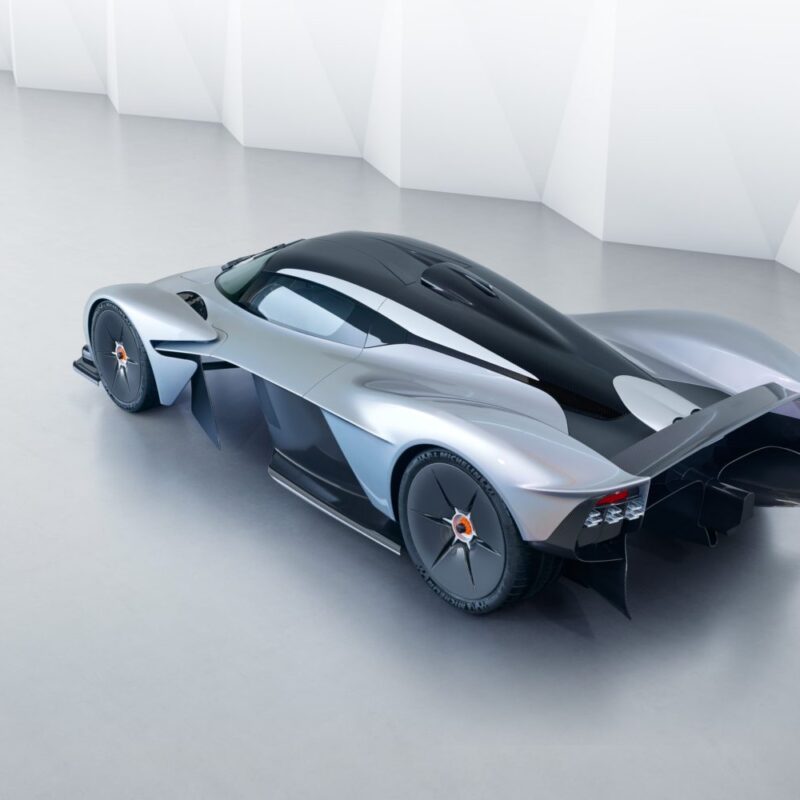 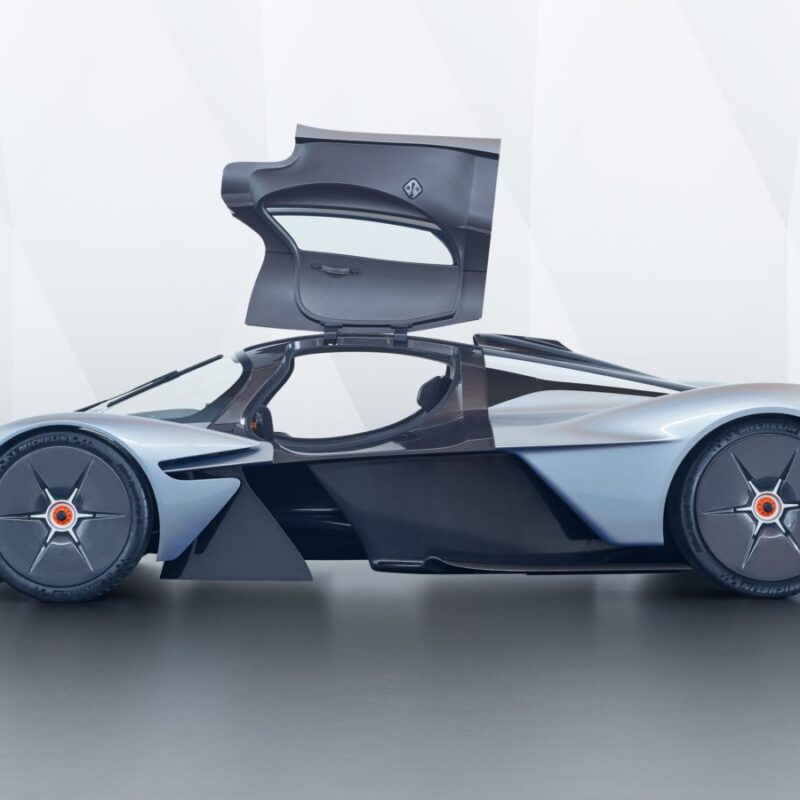 The Aston Martin Design team were keen to keep distractions to a minimum and focus the driver on the road ahead. To this end-all switchgear is located on the steering wheel, with all the vital signs shown on a single OLED display screen. The steering wheel is also detachable, both to aid ingress and egress, and to serve as an additional security device.

Great attention has been taken with the glasshouse design to ensure forward and peripheral side-to-side vision is virtually uninterrupted. To avoid any unwanted aerodynamic disturbance or stylistic ‘clutter’ traditional door mirrors have been replaced by discreetly mounted rear facing cameras in each of the Aston Martin Valkyrie’s flanks. These feed two displays which are positioned at the base of each A-post to mimic the view provided by conventional door mirrors. The all-enveloping bodywork and roof-mounted engine air intake means there is no rear window, negating the requirement for a rearview mirror.

Matt Hill, Aston Martin Creative Director of Interiors said of the Aston Martin Valkyrie’s cockpit design: “It’s been a tremendous challenge to make the interior packaging work. We’ve embraced Red Bull Racing’s Formula One ethos and approached from a different angle than conventional road car design. In this instance, we’ve started from a position where you think something is impossible and work at it until you find a way to make it work. We’ve been fighting for millimeters everywhere, but the battle has been worth it, as it’s been fantastic seeing customers try the interior buck for size. They love the ritual of getting in and how it feels to be sat behind the wheel. They’re also genuinely surprised at how the car just seems to swallow them. You really do have to sit in it to believe there is genuine space for two large adults.” 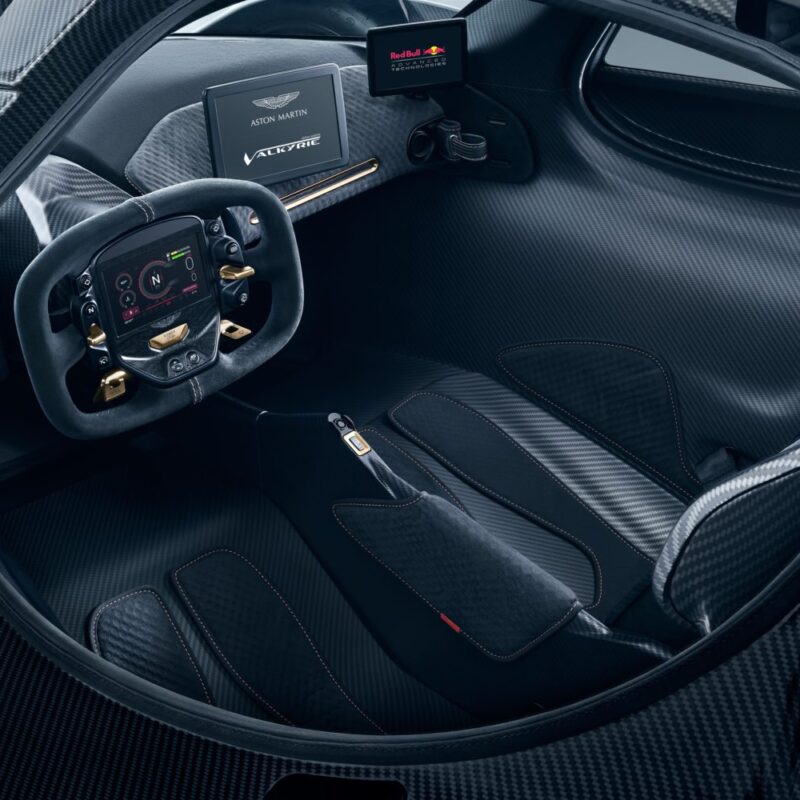 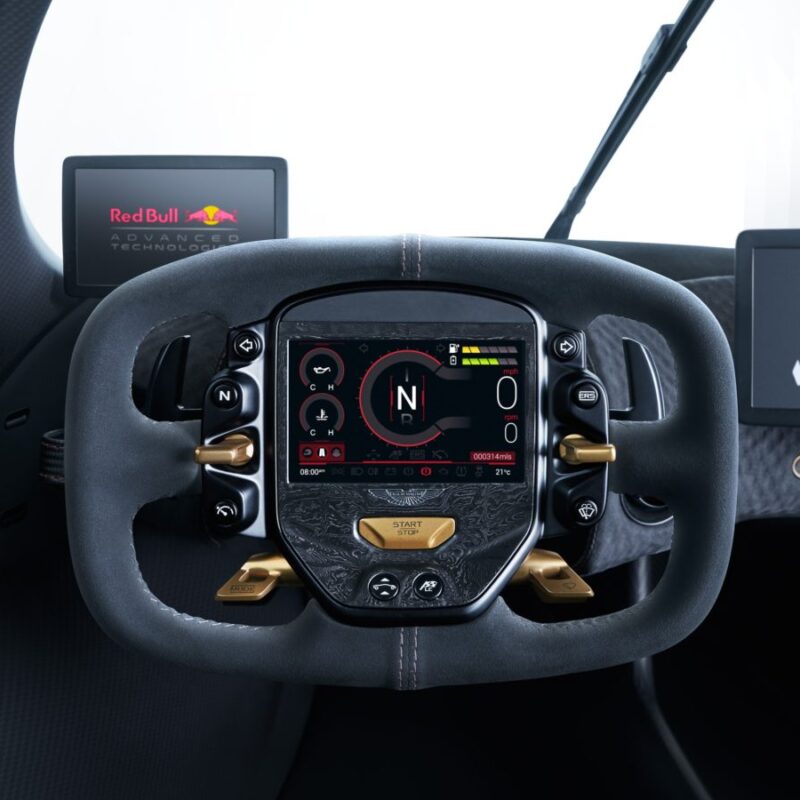 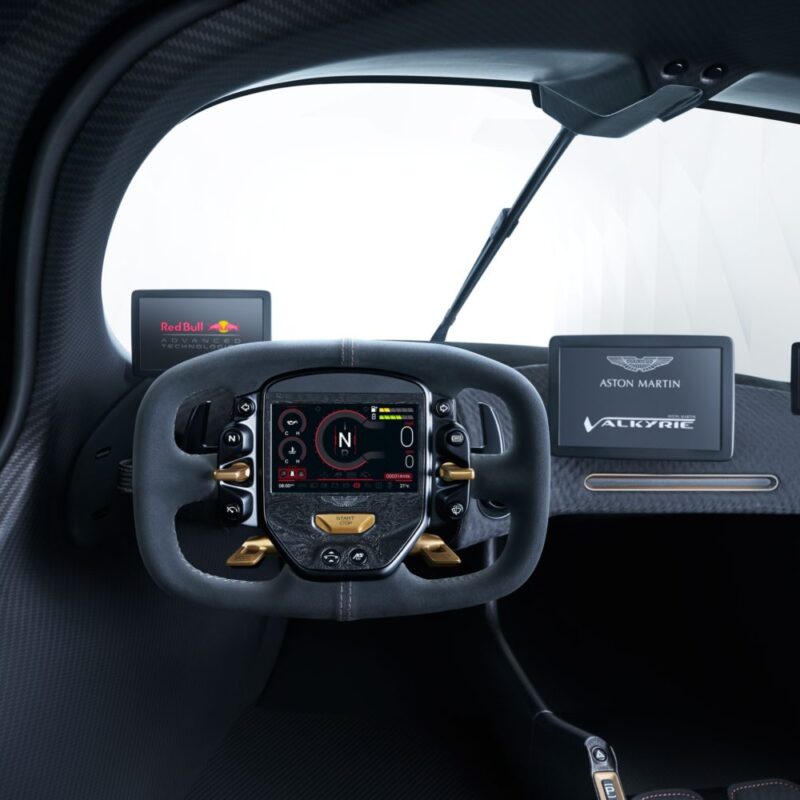 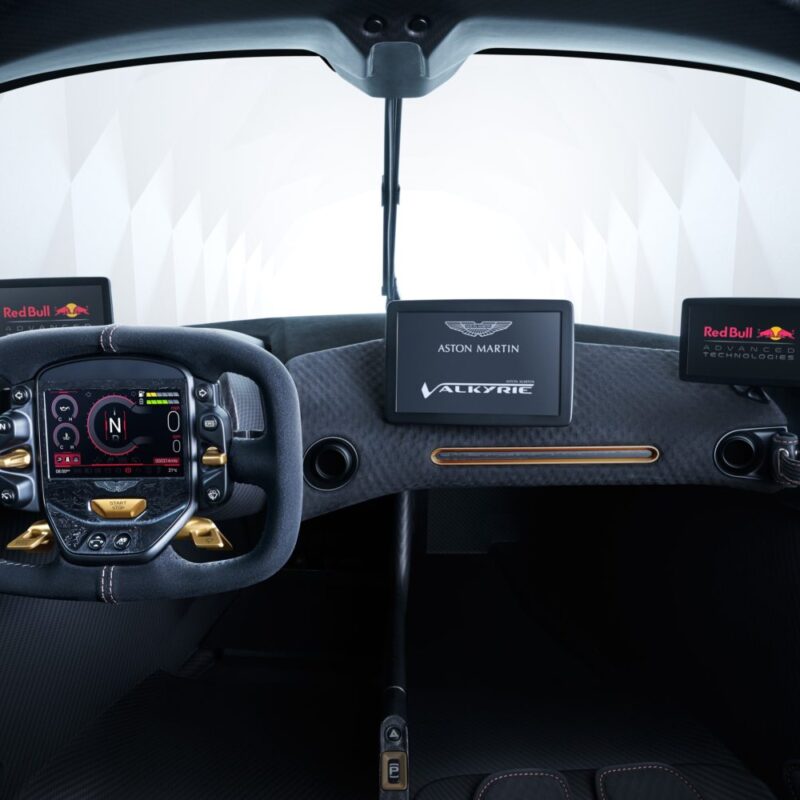 While the essence of the original Aston Martin Valkyrie exterior design remains unchanged, Adrian Newey’s pursuit of downforce and aerodynamic efficiency has driven many detail changes to the bodywork. These requirements have been faithfully incorporated into the design by the Aston Martin Design Team in a genuine case of form following function.

One of the biggest changes in this latest model are openings in the body surface between the cockpit and front wheel arches, Adrian Newey having found that they were the key to achieving considerable gains in front downforce. It was then the job of the Aston Martin Design Team to integrate these new apertures into the overall design and ensure they had aesthetic merit as well as aerodynamic function.

While aerodynamics and downforce are the dominant story, Aston Martin Valkyrie features some delightful details. Some of the most striking are the headlights, which take inspiration from the pure functionality of a Formula One car’s components. Aston Martin’s designers stripped things back to the bare essentials, celebrating the engineering rather than concealing it behind cladding. With the low and high beam elements attached to an intricate exposed anodized aluminum frame not only are the headlamp units a work of art, but they are 30-40% lighter than the lightest series production headlamps available to Aston Martin. 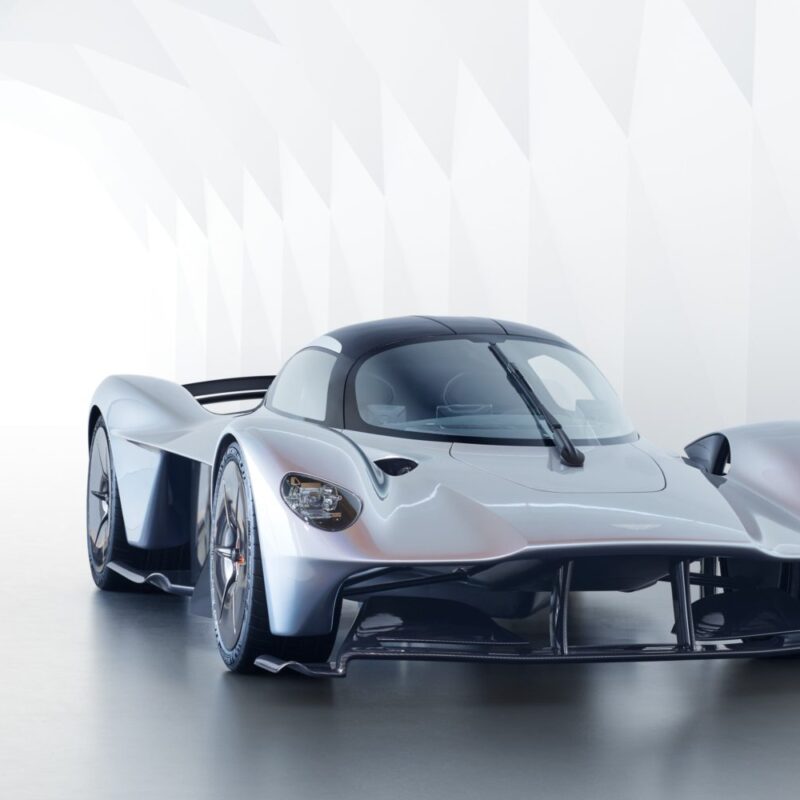 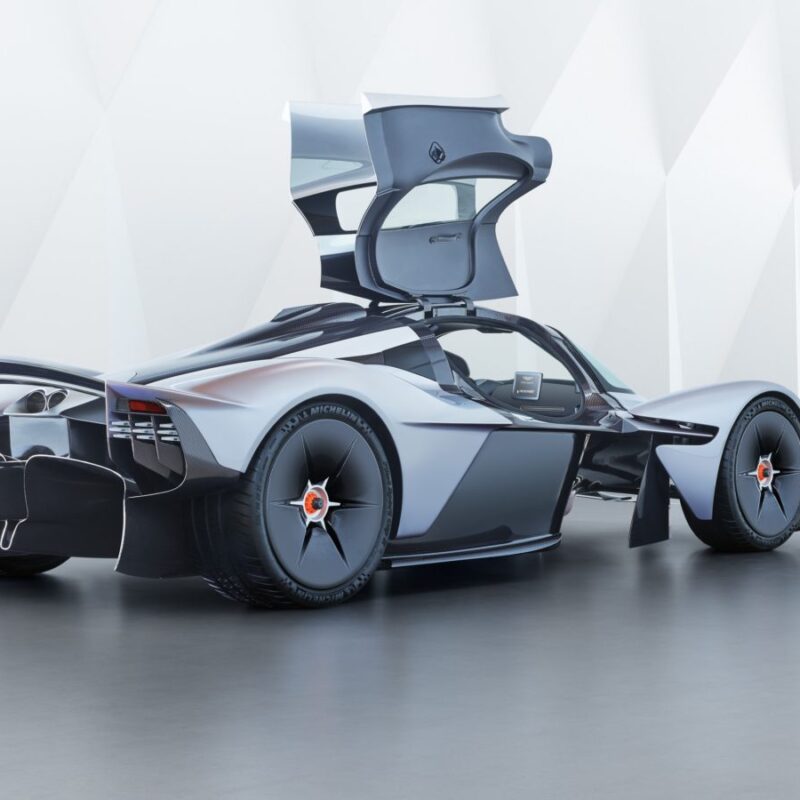 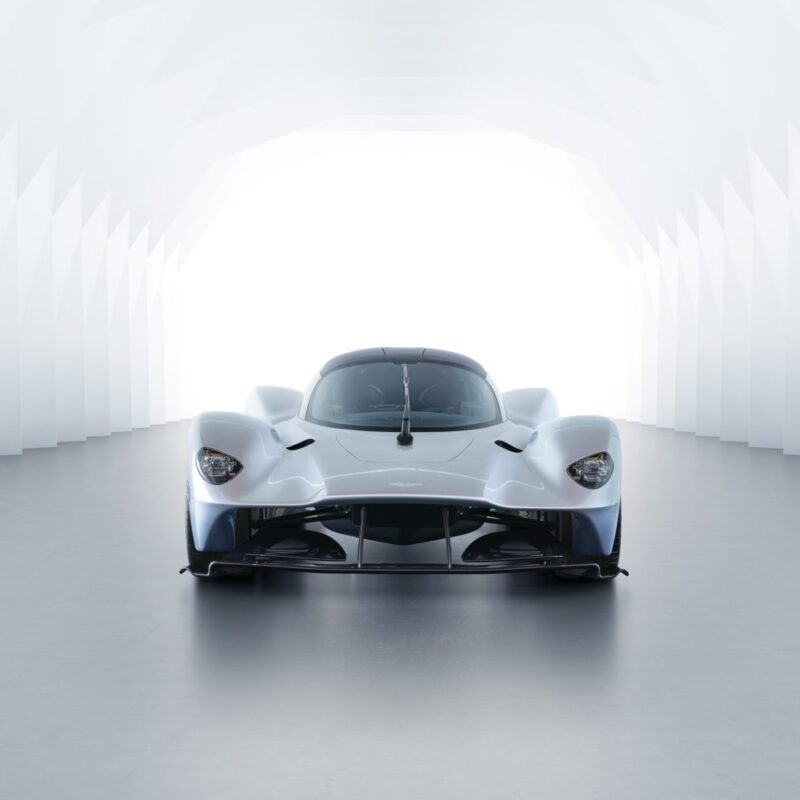 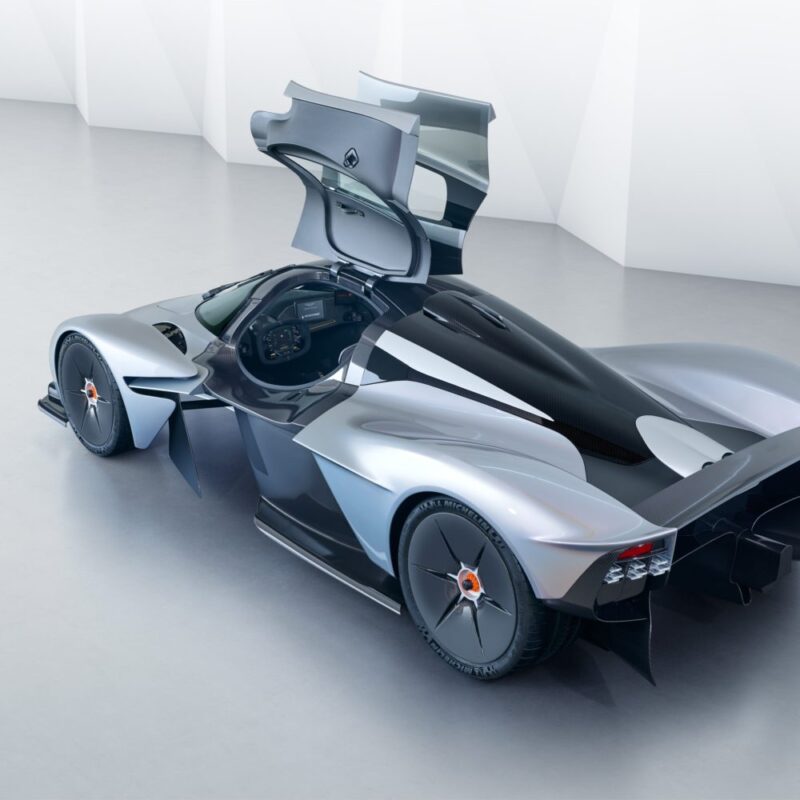 The same approach has been taken with the Aston Martin ‘wings’ badge that adorns the nose. With the regular badge considered too heavy, and a simple sticker not befitting for a car of the Aston Martin Valkyrie’s quality and cutting-edge nature, the Aston Martin Design Team came up with a chemical etched aluminum badge just 70 microns thick. That’s 30% thinner than a human hair, and a remarkable 99.4% lighter than the regular enamel wings badge. The badge (nicknamed the ‘lacewing’) is then attached to the painted body and covered with a perfectly smooth coat of lacquer.

Further detail innovation can be found at the rear of the car, with the center high-mounted stop light (CHMSL). Mounted on the tip of the small shark’s fin that runs down the spine of the Aston Martin Valkyrie’s airbox and rear bodywork, the light is just 5.5mm wide and 9.5mm high. Illuminated by a red LED it is the world’s smallest CHMSL and evidence of how every element of the Aston Martin Valkyrie is scrutinized in the pursuit of eliminating unnecessary weight and drag.

Aston Martin Creative Director of Exterior Design, Miles Nurnberger, said of the Aston Martin Valkyrie’s design evolution: “I would say we’re around 95% of the way there with the exterior design. Much of what you see is actually the structure of the car, so this had to be signed-off relatively early in the project. The remaining areas of non-structural bodywork are still subject to evolution and change as Adrian [Newey] continues to explore ways of finding more downforce. The new outlets in the body are a case in point. Ordinarily, the last thing we’d want to do to one of our surfaces is cut a hole in it, but these vents work the front wings so much harder that they’ve found a significant gain in front downforce. The fact that they are so effective gives them their own functional beauty, but we’ve finessed them without impacting on their functionality. That they also serve as windows through which to view the fabulous wing section front wishbones is a welcome bonus!” 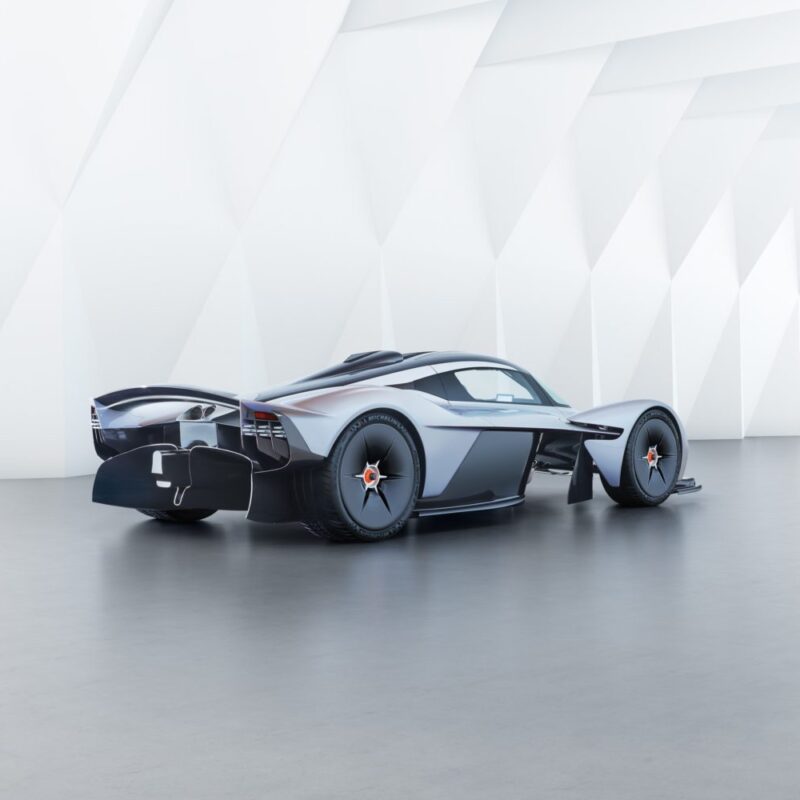 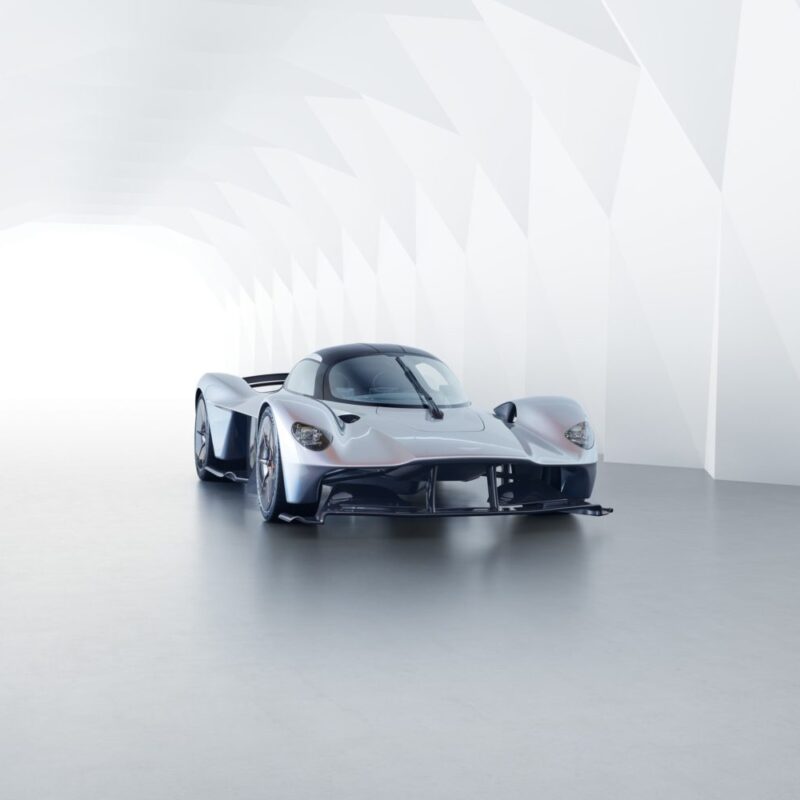 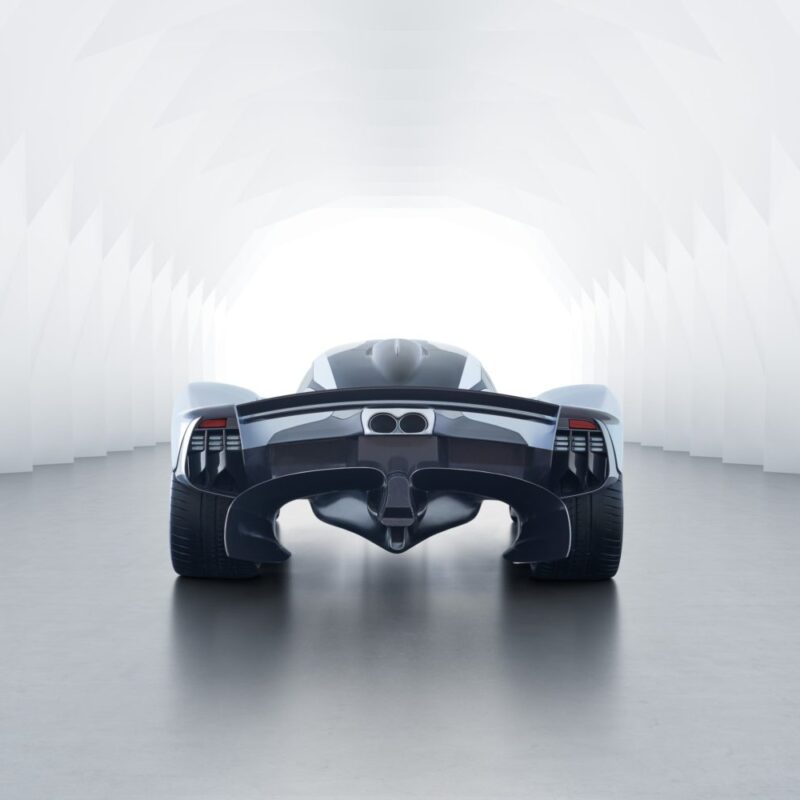 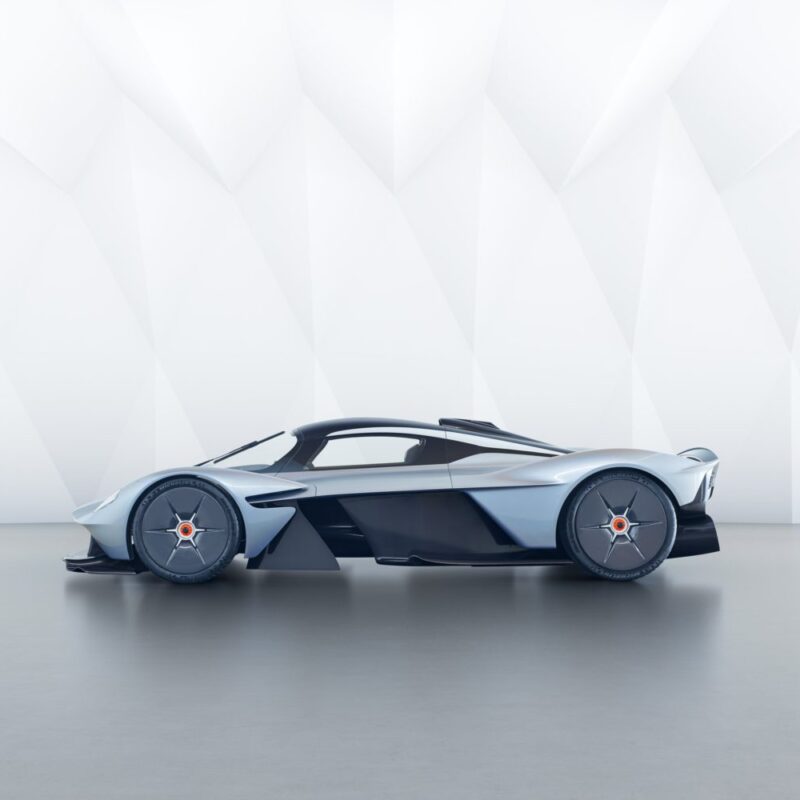